Where the Tale Begins

Growing up in Upstate New York, there were certain things that I always assumed to be true--constants of life. In the summer, we ate salt potatoes and hot dogs made from pork and veal (more than we probably should have), and went to a few too many parties in mosquito-infested fields or on pontoons. In the fall, we went to pumpkin patches and fright nights breaking out our one flannel for the year, and posed for more than enough obnoxious photos with our friends and significant others at the apple orchard. In the winter, we prided ourselves on being the snowiest city in America, and gladly trudged through 3 feet (1 metre) of snow to go Christmas shopping at JCPenney. In the spring, it was fried haddock, green beer, and college basketball (oh, and still a lot of snow, too). Why? Because that's just what did. Those were the strings that came attached to life while you were going to school, going to college, and then going back to your hometown to settle down with a spouse (often a high school sweetheart) and a dog in a 2-floor ranch house with a yard and a white picket fence, and raising the American average of 2.4 kids.

The thought of life being any different, even just a little bit, had rarely occurred to most of us.

I was a little different. Growing up, I often thought about what other places were like, but I was the only one I knew who did. You see, Upstate New York is here:

Bordered by five other states and two Canadian provinces, there was a whole other world that wasn't that far from us. I was always fascinated by the notion of so many different cultures jutting up against each other, but for most everyone else, unless it was a place with warmer weather, it wasn't really of interest to them.

Sure, most people had a general idea that Canada was there​. But much like how everyone becomes distantly familiar with their own neighbors' house by seeing it every day but never going inside, there was a certain mythology about the Great White North among the circle of people I grew up with: "I've heard it's nice but I've never been." "I think I went there once as a kid; I can't quite remember." "Don't they speak French there?" "They say the Canadian side of Niagara Falls is better." "Can't go there anymore; ever since 9/11 you need all kinds of paperwork." "It's nice but I wouldn't want to live there. They've got socialized medicine."

You see, much of America lives in an echo chamber, at best romanticizing and exoticizing that which is "other," and at worst discriminating against it. In my adulthood, I recognize that I grew up as a person of relative privilege: white, suburban, middle class. In so many ways, that already makes my American experience different from millions of others. But in a less solemn yet equally important way, my experience growing up as an Upstate New Yorker is markedly different than someone from, say, New York City, or California, let alone someone from another country.

​I had a good, "normal" life in America, and in more ways than the academic ones, I do consider myself quite privileged to have grown up there. It is a huge part of who I am, and I had always been content with staying there forever. It wasn't perfect, but it was home. In fact, I always felt a sort of solemn responsibility to my community, like somehow we all owed something to our hometowns because they were the places that raised us. I had a way with words in trying to make our mediocre mid-sized city sound just as beautiful and idyllic as London or Paris, and in high school I started a campaign against community apathy. I ran for class president in my small high school, with loads of fundraising projects and community drives planned. I was at town council meetings taking it all in, and I was at the ballot box making my voice heard for even the weirdest, smallest town elections that nobody else even knew existed. I had an opinion on everything (I know what you're thinking: this guy sounds like a treat), but I never really got anywhere with any of it. I learned the hard way that you can't make people care about things the way you do, and so, we should focus our efforts on embracing those who do care.

It was back then that I hit a particularly low point in my life. I went to a liberal arts college (I can hear you groaning at the screen) where I learned about injustices going on in the world I had never even considered before. Some were abroad (war, famine, human rights abuses), and some were in my backyard (redlining, poverty, Native American sovereignty). I was making a lot of social justice social media posts that were getting me unfriended, and meanwhile I was also the only one pulling weeds at the seldom-maintained village park. This was all notwithstanding the fact that it was a time of nauseating politics in America. It was a time that I felt alone in a city full of people.

​So eventually, I trained myself to do something I had never really done before: living for myself. (Looking back, I find it odd that this wasn't something that had occurred to me before, after spending a lifetime in the land of individualism.) This isn't to say I "gave up" on my community, despite the feeling that my community had given up on me. Rather, I decided to try to be a citizen from a distance, and turn my everyday focus to my own health, and rediscover things that made me happy. I got back into reading, and writing, and music, and old TV shows, and LEGOs, and most of all, road trips. In four years I put 80,000 miles (130,000 km) on my car, visiting old friends, trying new restaurants, chasing the perfect sunset, or just doing nothing at all. Just as they always did, people tended to call me crazy for spending money and time I didn't have, doing things nobody cared about, just to come back home to Syracuse at the end of the day. But to me, every new experience was worth the trip.

It was the summer of 2018 when a friend of mine twisted my arm and got me to put myself out there by downloading an online dating app called Hinge. It wasn't the most popular dating app at the time, but I really was not in a position to be "casual" with people, like those other apps so advertised. I wanted a real connection with somebody, which is what the folks at Hinge promised to deliver (not a sponsor--yet). Not at all expecting to find anybody because of the app's relative obscurity, I was surprised when it took just a few days for me to find a beautiful young lady who loved pink sandy beaches and lemonade, had an impressive collection of Croc Jibbits, was bilingual and an accomplished competitive improv comedian, and worked at a campground in the summers while studying psychology. Her name was Sydney: 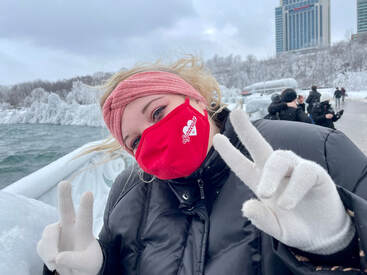 Well it just so happened that Sydney lived in a place I had studied a lot about but had seldom ever been. I think you can see where this going...

In September 2018, after two months of online dating, we had taken quite the liking to each other, and I decided to take a different kind of trip. Putting my phone in Airplane Mode to avoid any roaming charges (remember those days?), I told Syd I was going to take a nap, and then proceeded to get in my beat-up Corolla and drive from Syracuse to Ottawa, a three-hour drive, to surprise her in person. I crossed the border in the midst of torrential rain (the aftermath of a tropical storm that had moved north), made my way up Ontario Highway 416, parked on the University of Ottawa campus and began wandering around in the rain, hoping I would find her. I didn't, and it was really cold, so after about 20 minutes I gave up and turned my phone on, and asked her to come rescue me.

And the rest, as they say, is history. 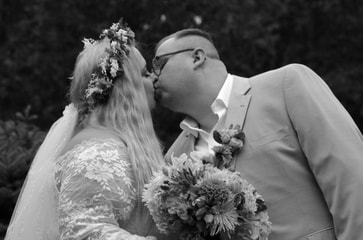 For reasons you will read about in this blog, we had decided a long time ago that if and when the time came, I would be the one to make the move to Canada to start our life together. It was an unthinkable decision when I made it, but in 2022, I finally followed through with it. And here we are!

​My high school English teacher once told me the point of reading literature was to "find truth," and it took me so long to learn that truth is not just "things that are true," but rather, an expression of all that which seems real and right. Truth is not material items we buy or the names we call things, but something universal that unites us all, that even though it may look different and feel different to some, has always been and always will be true.

Home is a truth, and it looks different to some. What is home to you or I may make no sense to somebody else, and indeed, the place I live now makes little sense to most people I know. Sometimes it's confusing to me, too. But see, that mindset is a fatal flaw. Home is not necessarily always a place. I used to think home was about the ZIP code on your mail, the high school name on your diploma, the streets you drive on every day or the stores you shop at. But when it comes down to it, none of those things come close to comparing what is really important: each other. Over the years, I have learned my truth: that home is family; the people we put in our lives--people who care--and the experiences we share together, no matter where they are or what they look like.

But hey, reading about shopping and food is more fun, right?

Well that's where you come in, dear reader! You see, for me, the little slice of the world I call home just so happens to be two different countries now. And so, in sharing my truth with you all, Sternbergopolis is going to be tales from two countries. Sometimes it's going to be soapbox speeches like this, but sometimes it will be zany, if not neurotic analyses about the differences in speaking patterns, living arrangements, manners, cuisine, laws, jobs, and all the other strings that come attached in life. I'll occasionally tell stories about my love affair with Canada, about my experience with the immigration process, about life in a new country and returning to an old one, about learning how to be something other than what you were always expected to be or always assumed you would be, undoing some of that American hardwiring, learning to love thy neighbor(u)r, and of course, about family. Sternbergopolis is a blog for those who are inquisitive, who have an interest in how borders affect people, and how people affect borders. It's for people who don't just sit and ponder about what a new place might be like; it's for those who are brave enough to go see it.

How could a place so geographically close seem so distant, yet still be home? This is the question I will always be wrestling with, and I hope that you occasionally tune in as I journey to find answers. I promise it will be worth the trip.
​I am not a lawyer and this blog is not intended to be legal advice. All views are my own and are not representative of any organization or other individual. All rights reserved.
Powered by